Magda Tothova will take part in VIENNA Live at VIENNAFAIR from October 10 to 13. For The New Contemporary Blog she prepared a special interview about happiness:

Back in 2009 Ad Astra United started as a small company. Their business idea to offer people a means of getting rid of their negative energy became a huge success, and so, four years later, they’ve decided to shift their aim in a different direction. Ms. Emma Schmidt, the CEO of Ad Astra United, who I met for the first time at the Futuristic Interdisciplinary Fair in Zürich, told me that it was time to make this service accessible to everybody who is interested in becoming happy again.

I met Emma for this interview at the botanical garden in Vienna. She carefully chose a bench under her favorite tree, the handkerchief tree.

Magda Tothova (M.T.): I can see why this tree is your favorite one. It kind of has a sad aura but at the same time it appears light, so it doesn’t feel threatening.

Emma Schmidt (E.S.): Well, I don’t find it sad, even though the name might be connected to drying tears or having the flu. But you are right about the lightness. I definitely like that. And it’s also a deciduous tree, so the leaves fall off and begin all over again. It’s the idea of death and rebirth. That is, I guess, what I like most.

M.T.: Is that the main idea of Ad Astra United as well?

E.S.: You could say so. When the four of us started our company the idea seemed like the right one. Everywhere you looked there was – and still is – sadness, discontent, struggle, and pressure. It seemed like there was no way out. We recognized that people had huge expectations for their lives but they didn’t have the ability turn their aspirations into reality. Most of our clients were struggling with an unrealistic image of themselves or goals they were after.

M.T.: Where does people’s discontent come from?

E.S.: Oh, that’s a difficult question. Being unhappy is not new in our society. I guess it has always been like that. People exist in a dichotomy of ideas of right and wrong or good and evil always pressing upon them. People cannot do everything right all of the time. In other words, they are stuck. For example, cultural and family traditions can be very hard to follow. Especially now, culture is changing at an alarming rate, and sometimes those traditions are not adequate anymore. However, if you move away from the tradition and fail, then you become scared of trying to change again. You have to have courage to continue on the path of growth. Change requires time and energy, which a lot of people simply don’t have. So they live kind of in-between. Restless.

Another reason for discontent is the constructed image projected by media and the advertisement industry. You are told what is the ideal. The catch is, most of the time you have to purchase something to achieve an ideal. Then, of course, the ideals change in accordance with what sells the best, so you are constantly on the run for the next new ideal product, emotion, or thing. As a customer you are always a step behind and that causes distress and pressure.

M.T.: But, as I remember, at first you also offered an ideal and people had to pay for it if they wanted to benefit from your service.

E.S.: You are right, that’s how we started. So as I said, at the beginning we had this idea to create something where this negativity could be stored. This came from a project in which my colleague Olcay Tilly, at that time a student of physics, found a formula for creating antimatter that can exist within a benign matter. This fusion fully absorbs negative energy without causing harm to the environment. After she patented the formula, she approached us with her business idea. Why not build a huge object where people could get rid of their negative energy, even if only for a short time? And, with the right business model, they could do it frequently and ease their everyday lives.

M.T.: On one hand that sounds wonderful, but on the other hand I guess this possibility makes people very passive, don’t you think? This kind of outsourcing could manipulate the way people deal with their issues.

E.S.: Well, that is one way to look at it. We live in busy times. I think people can use some help and support to make changes and to start all over again.

M.T.: Why did you charge for the service?

E.S.: In the beginning we didn’t have much money, but we had a good idea. My partner Peter Candle prepared a good presentation, and we started to look for a business angle. It took us a few meetings to find the right person. Someone who understood very quickly what we were hoping to become – a big success. Our new shareholder, who prefers to be a silent partner, introduced us to very helpful institutions. These institutions worked with specialists and helped Olcay to enhance and improve her original formula. But still, we all wanted to contribute, so we all took loans to be able to build up a functioning business plan. That’s the simple reason why we had to charge our customers. But, as it turned out, more and more companies and private individuals became interested in our service. Companies bought several sessions for their employees, simply to support them. They believed that happy employes are the most productive ones. The request was huge, and within 14 months we had our expenses covered and could start to invest in new technologies.

M.T.: Tell me more about these improvements?

E.S.: You know, this might sound a bit naive, but our profits became larger than we had expected or were even hoping for. We realized that the accumulation of capital was not the reason why we started this business. Our idea was not to contribute to the ongoing decline of the middle class. Most of our clients were rich citizens from all over the world. This fact became quite depressing. And as our service is not able to erase memory or the recurring feelings of guilt, we decided to change something. After a long discussion with our shareholder, who luckily agreed with us on this in the end, we started to search for a way to make our service accessible to everyone on Earth. The easiest way at the moment is to provide this via Internet.

M.T.: But not everybody has access to the Internet!

E.S.: Yes, but soon everyone will, I am sure! And we are working on other solutions, too. However, it is too early to talk about such ideas.

E.S.: The new service is found on our website www.ad-astra-united.org. To start, take a short moment to relax. Close your eyes. Then look at the screen, you have to concentrate on each corner of the form, then you draw a line with your eyes between the corners. First diagonally and then along the sides. Which direction one completes this is up to the individual, but it has to stay the same through the whole session, you don’t alter your chosen strategy. You have to carry out this minimal movement for at least one minute. After this time you will feel the first symptoms of relief.

M.T.: Do you really believe in this?

E.S.: I know that most people think achieving relief has to be complicated and takes a long time. But it really doesn’t. I assure you, this works. It is a form of meditation combined with the highest form of technology. What you see is not an ordinary surface. How it actually works understandably must remain a secret of our company. This is what we offer. We cannot change what people trust in. It is an individual’s own decision to take the step and to start to believe.

With the kind support of Tara M. Hills and Paul Philipp Heinze.

Magda Tothova, was born 1979 in Bratislava, Slovakia, lives and works in Vienna, Austria.

Tothova received a MA from the University of Applied Arts Vienna and previously studied at the School for Artistic Photography Vienna (F. Kubelka) and was a visiting student at Gerrit Rietveld Academy, Amsterdam. Tothova made a solo exhibition at Federico Bianchi Contemporary Art, Milan (2010/2013), and her work has been presented in group exhibitions in the following galleries and non-profit institutions, among others: Adds Donna, Chicago (2013), HDLU Zagreb (2013), Europe House, Tbilisi (2012), Bytom, Poland (2012), Sculpturegarden, Strombad Kritzendorf, Klosterneuburg (2012), Project Artspace, New York (2012), and Sofia City Art Gallery, Sofia (2012). She has been an artist-in-residence in London, Copenhagen, and most recently in Chicago.
Since 2004 editorial member of the art fanzine: Chicago/Times/Plotter/Helvetica/DIN/ Techno/Löhfelm/RR_02/Univers/Tiffany/Circuit/Memphis/Gringo/Zeus/The Mix/Princess Lulu/Pigiarniq /Paper/Libertine/Trixie/Déjá vu/Auto/Rediviva2013

Tothova’s work revolves around modern utopias, constructed norms, social models and their failures, how to address personal and social issues in the private and the political field. Borrowing heavily from fairy tales and science fiction, she is interested in the formation of myths or the essentialism underlying the concept of chance.

One thought on “School of Happiness Lesson 15: You Are Just One Click Away From Becoming Happy Again” 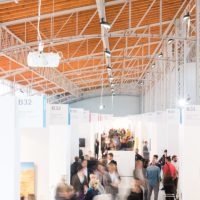